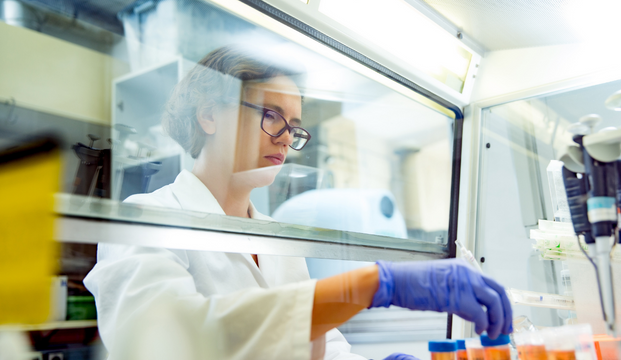 A fume hood is a necessary part of any laboratory that deals with toxic fumes and/or chemicals. A fume hood (also known as a chemical fume hood, fume closet, or fume cupboard) is a piece of equipment designed to keep lab personnel safe by capturing airborne pollutants and directing them away from the user.

Parts of the Fume Hood

To properly protect the user, the fume hood consists of several different components.

Hood body: This is the part of the fume hood that is clearly visible and serves to trap hazardous fumes.

Fume hood sash: The sash is the adjustable portion of the front opening. Every fume hood will state the optimal configuration required for properly containing the chemicals. For the fume hood to work efficiently, it is important to follow the sash guidelines. When not in use, the sash should be closed. A fume hood is not meant for storage, so remember to remove all chemicals before closing the sash.

Baffles: Baffles are movable partitions. They are used to create slotted openings along the back of the hood to equally direct the air that is being exhausted out. When adjusted properly, baffles will eliminate any dead spots and optimize the efficiency of the fume hood in capturing the contaminated air.

Work surface: The work surface is the area below the hood where the laboratory work is performed. This could be a bench top or alternatively, the floor of a walk-in fume hood.

Airfoil: The airfoil is located along the bottom and side edges of the fume hood. Airfoils help to simplify the airflow and prevent whirls of air known as eddies from carrying contaminants out of the hood and into the work area. There is also an open space below the bottom airfoil that works as a place for the hood to exhaust when the sash is completely closed.

Face: The face of the fume hood is the plane that exists between the bottom of the sash to the work surface. The hood pulls air from the laboratory into the fume hood through this opening. It also serves as the entry point to the work area. This is where face velocity is measured.

Whether you are working with chemicals as a hobby or within a laboratory environment, it’s important that you invest in a ventilation system to keep toxic fumes out of the work area. The first step is to determine what type of fume hood you should invest in.

Bench-top Fume Hood: Bench-top fume hoods are hoods that are placed on the top of a work surface. They are, on average, about three feet from the floor. This type of hood requires ductwork, a base cabinet, a work surface, and an exhaust blower in order for it to function properly.

Walk-in Fume Hood: Also known as a floor-mounted fume hood, a walk-in fume hood does not sit on another surface. This type of fume hood is similar in size to a small closet and comes in a wide variety of measurements to best fit your needs. Walk-in fume hoods are best for when working with oversized tools or equipment.

Portable Fume Hood: Also known as recirculating range hoods, portable fume hoods operate on a carbon filter system. These fume hoods are smaller in size and may have wheels in order to move them easily. Portable hoods are ductless so ductwork is not required. They also use less energy than full-sized fume hoods.  Portable fume hoods are ideal if you work with small amounts of chemicals (under 10) and the chemicals being used can be filtered through carbon.

Double-faced Fume Hood: Double-faced fume hoods are just that, double-faced. This means that there are workspace entrances on both sides creating a 360-degree viewing area. Like portable fume hoods, these can also be moved with ease to different areas. The most common use for double-faced hoods is in classrooms or other learning environments where demonstrations are given regularly.

The primary function of a fume hood is to protect laboratory personnel. Choosing the right type of fume hood will depend on a number of factors including how big your project is, the type of project, what chemicals will be used, and your budget. If you need assistance in choosing the right fume hood for your work area, please don’t hesitate to contact us.